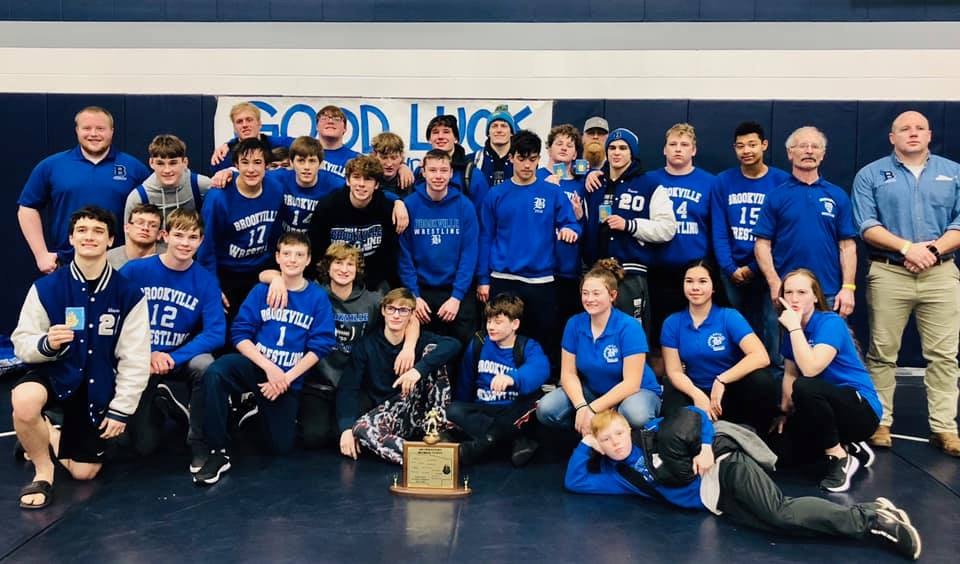 Since 1977 Brookville High School has dominated the SWBL wrestling championships and 22 times has brought home the league trophy. You can now, make that 23 times, as Brookville again dominated league competition and returned the championship to it’s rightful home!

I asked Coach Sampson about his team, how it feels to be a league champion, and what lies ahead for these young men, “It’s been 9 long years since our last league title. It was a great victory for an outstanding group of wrestlers. We have an amazing group of seniors, they were sophomores when I became the coach. There was only 1 upper classman that year. They were thrust into the fire, and maybe before some of them were ready. We had 3 sophomore captains that year. They accepted every challenge that I’ve put in front of them and they’ve grown with each victory and defeat. They have fully embraced the “family” culture and have instilled those values by actions to the rest of the team. Replacing what this group means to me personally isn’t possible but I believe the culture they have helped me build will be enduring. It’s the charge of the next group of leaders and my coaching staff to keep it going. Does that mean we’re going to run off 20 straight league titles? We’ll see, I will tell you we do have a lot of depth. We have a great group of freshmen coming in and our elementary group is special too. The ingredients are there, for a strong and enduring program. What’s next? I’m excited to see how we finish the next few weeks as we get into the individual tournament (Sectional, District, State). I’m also anxious to see how these young men attack life, and what they become as men. I hope and pray that the battles they have won and lost on the mat can help them to endure the battles they will be tested with in life. I have been in the military for 19 years and can tell you that nothing I’ve done was harder than wrestling physically and sometimes mentally. It’s more important than wins and losses and championships. Don’t get me wrong it’s fun to win, but that’s my “why”.”
I believe wrestling instills the qualities necessary to compete and thrive in everyday life and when facing life’s inevitable challenges, so does Coach Sampson, and he works to this goal.

I asked Sam for a brief synopsis of our league champions:
132- Mason Esterline Junior – “No doubt best performance of the year. He came in as the 2 seed. The 1st seed was Peyton Brown from Milton Union. Brown won league last year at 132, Esterline got 5th at 132. 132 was loaded with talent, he didn’t get any easy matches and approached it with a great attitude. It was a sweet victory.”

145- Devon Myers Senior- “He’s been chasing this for quite some time. Placing 2nd last year hurt. He’s also been battling injuries all year. It’s been a struggle both physically and emotionally. Honestly he was on the verge of breaking. He pushed through the adversity and pain. He helped his team place 4th at State even though he wasn’t 100% and hurt throughout the tournament. This was his coming out party and he knew it. He felt and looked great, he absolutely dominated on his way to the finals and won a great match against a great opponent in the final. I’m so proud of your performance Devon! You’re just getting started.”

182- Luke Williams Senior- “Luke has been outstanding this year. He’s 38 and 4 this year with 31 Pins. Wowza! 31 pins is already a single season record. He pinned his way through the bracket and broke the record in the finals!” (The previous season pin record was set in 2010, by Aaron Wilbanks with 30 pins.)

220- Matt Hamm Senior- “I’m fairly sure this is his first time at the top of a podium. He picked a great time to kick it into high gear! In the finals he got put on his back but fought hard for 30+ seconds to get out. It felt like an eternity. He was down 5 but he’s like the energizer bunny and he just wears kids out. He ended up pinning his opponent and the joys of sweet victory were felt by all.”

For the record every wrestler, in every weight class scored points for the Blue Devils thus contributing to a total TEAM victory and the runaway score besting second place Monroe by 50+ points 248 to 198, Valley View finished in third place with 150 points. “Every wrestler in all 14 weight classes scored points. We earned a bunch of bonus points and gave up very few.”, said Sam.

Team victories require team sacrifices. Sometimes this means moving to a different weight class if it looks like more TEAM points can be scored by doing so. This can be upsetting to be moved out of your normal weight class, but again an individual sacrifice may be necessary for a TEAM victory, and such was the case this weekend. “I moved Bailey Larson Senior to 120 from 113. I felt he had a great chance of scoring big points there. It worked and he ended up second against bigger opponents. I also moved our 106 Logan Jones Freshman to 113. That worked too! He was clearly smaller than all his opponents but that didn’t stop him. He ended up 3rd and was losing by 8 in the finals but secured a pin for the win. Owen Ashworth Sophomore 138, was in for Junior Captain Brennon Moore, this week. Brennon had the flu and was out 3 days. Ashworth did great finishing 6th. He lost two heartbreakers in overtime but I saw a lot of growth in his wrestling. He did an outstanding job!” commented Sam.

Khadyn Jacobs 106 freshman just missed qualifying by one point and did a very good job for the Blue Devils. At 113 Logan Jones was moved up, he has had phenomenal development in only his second year, has great balance and there is no quit in him, you had better be in shape when facing him, as he is always coming at you, Logan finished in 3rd place with a pin in 2:29. 120 Bailey Larson finished 2nd after moving up a weight class, this is an outstanding effort! 126 Timmy Davis finished in 5th place, lost in the semi’s but did a very good job. 132 Mason Esterline was seeded 2nd but came in first, Mason had two close matches in the semi’s to make the finals. 138 Sophomore Owen Ashworth filled in for Brennon Moore, finished in 6th place by 2 overtime points. 145 Devon Meyers, a state qualifier found himself down by one point in his final match, undeterred scores a takedown and back points to secure a 9-7 victory and 1st place finish. 152 Gianni Carey finished in 5th place, wins with a takedown and back points also. 160 Dylan Starnes, a sophomore, finished in second place, outmatched but no quit in this pit bull of a wrestler, had to be scouted as his finals foe had no desire to wrestle on the mat with this kid. 170 Chase Dyer, senior state qualifier, finished in 3rd place, arguably competing in the toughest weight class with 3 state qualifiers. 182 Luke Williams has had a terrific year as a senior, pinned all of his competition to win his league championship, no doubt there have been some wild matches in his front room with brothers David and Dylan preceding him. 195 Sadler Henson senior wrestler in only his first year on the mats, one of the hardest workers in the wrestling room, scored consolation bonus points but was not able to place. Senior Matt Hamm found himself behind 5-0 in his finals match, doesn’t quit and comes back and pins his finals opponent in 3:49 to bring the crowd to it’s feet! 285 senior Jon Mitchell found himself facing a district placer and a great athlete, finished in second place but scored valuable bonus points in the semi-finals.

With this outstanding team effort, I was hesitant to ask for an individual wrestler of the week, but Coach Sampson was quick to respond, “Chase Dyer 170 Senior captain- Battling the flu and with the toughest weight class by far he got 3rd place. Thank you for your leadership and sacrifices for your teammates!”

Brookville will have to move on from this great TEAM victory and compete on February 28th and 29th at Covington High School for the sectional wrestling tournament. A top 4 finish will be necessary for anyone hoping to move to district matches. We congratulate Coach Sampson, his fellow coaches and of course, the league champion, wrestlers.

A closing note to the 2020 SWBL Wrestling Champion team, this championship has been a long time coming, too long! I assure you, that there are many ex (old) Brookville wrestlers and coaches looking at your championship and, smiling, a smile of quiet satisfaction. They know what it is like to be a champion. The old accomplished much, they established a legacy of greatness, of success, and you have added to that legacy. You now join that select fraternity, and you are welcomed to it, with open arms. Will it be another 9 years,… long years, before the next championship? Time will tell, and this now becomes your burden, your challenge, your mandate, can you repeat? Can you build on this success? Brookville is proud of you, and you should be proud of yourselves. On their behalf, Congratulations and Thank you!

Support our schools, support wrestling, see you, on the mat…of course!